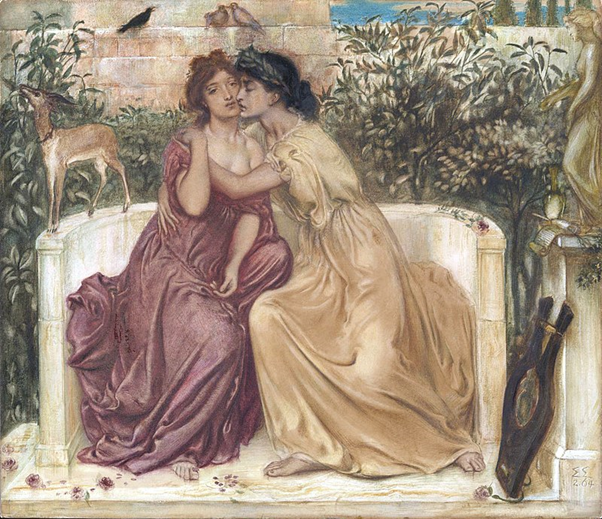 One of our year 10 students, Variaam Tratt, has just submitted this outstanding Classics essay for a national competition. The essay explores whether the lives of women in the ancient world can truly be explored and understood through reading Classical literature.

Variaam has been working on this essay since December and has done extensive reading outside of the curriculum, both of ancient texts and recent scholarly articles. Our Head of Classics, Mr Anderson, had this to say:

‘The essay discusses huge range of literature, from female characters in the Iliad and Greek tragedy to Ovid’s beauty advice in Ars Amatoria, and of course the female Greek lyric poet Sappho. Variaam has come up with original points expressed with detailed textual analysis. It is some of the best work I have ever seen at ELSS.’

Variaam herself said this about her experience writing the essay:

‘As someone who has always been passionate about female rights and equality throughout history, this essay was the perfect opportunity for me to articulate my opinions and study women of classical antiquity in detail. The long essay writing process included lots of preparatory research and reading which lead to a 6,000-word plan full of quotes and information. With a word limit of only 1,500 words but a first draft of over double this, the long editing stage resulted in a better, more concise essay. This experience has taught me so much, for example how to reference texts and the power of editing. ‘

You can read the essay in full below

“The study of women in ancient literature is the study of men’s views of women and cannot become anything else” (Sarah Pomeroy) Do you think this is true?

Pomeroy argues that the study of women in ancient literature is only the study of men’s views of women due to the androcentric nature of patriarchal societies and the lack of female representation in the literary world[1]. Contrary to this, I believe that it is possible to study women of antiquity to some extent through the actions and opinions of the men who portrayed their lives. Despite however twisted and warped these portrayals may seem to the modern liberal mind, they offer an insight into the culture and opinions of women in classical antiquity. Many ancient authors and poets express misogynistic attitudes through their male characters; however, it is never made explicitly clear whether the authors themselves share these opinions. This observation raises one key question: can we ever truly study and understand the lives of women of the ancient world? 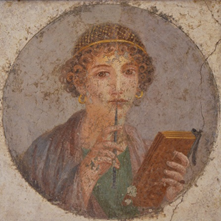 Throughout the entire genre of epic poetry, women act as supporting characters to the superior male heroes. Despite the incompetence of many of these heroes, these women are subject to oppression at the hands of their male counterparts. While it is made explicitly clear what roles men of the ancient world held, we are left questioning ‘what did women do instead’[1]. The Iliad answers this question by exploring the role of female characters in the male-oriented world that is war. Although Helen, Aphrodite, Athena, Hera and even Eris are often portrayed as the cause of the war, it is human nature’s tendencies to violence, greed and toxic masculinity that are to blame rather than lust or jealousy. It is this observation that suggests Helen is as much a victim of the war as baby Astyanax.

There are many attempts throughout ancient literature to implicate Helen, but to what extent can we blame a woman who spoke three times throughout the entirety of the Iliad? Despite her minimal involvement, she is the only character expressing a guilty conscience[2], referring to herself as a ‘hateful’[3], ‘dog, contriver of evil’[4], even suggesting ‘I’d rather I had died’[5]. The portrayal of her guilt aids the image of her character as emotional, indicating a softer, more morally aware side to her character, in comparison with the violent depictions of her male counterparts.

In a world enveloped with death and destruction, grief is common. A character’s grieving habits provide a raw, un-censored image of them. At Hector’s funeral, the prominent female characters in his life discuss him. His mother Hecuba refers to him as ‘dearest to me of all my children’[6]. Hector’s portrayal as her favourite implies that her grief is greater and perhaps even unbearable. Helen adopts a more self-centred approach to : ‘So I grieve aloud for you, and in my heart for my wretched self, since there is no one else in all wide Troy who’ll be kind or gentle to me’[7]. By focusing on her own personal loss, Helen shows her cruel treatment by others. Similar to Hecuba, Andromache focuses on her role as a mother; emphasizing how Hector’s death will impact Astyanax’s life: ‘you my child…perhaps, some Greeks will seize you by the arm and hurl you from the wall to your death, angered perhaps because Hector killed his brother, father, son’[8]. Andromache’s premature acceptance of Troy’s fall draws attention to the city’s over-reliance on Hector, not only as a merciless soldier in combat, but as a leader to look up to. Astyanax is the sole focus of Andromache’s speech, as a mother it is expected for her to worry for her child, but she conveys an almost accusatory tone towards Hector, blaming him for their son’s uncertain future. The maternal figures throughout The Iliad portray values similar to those of modern-day mothers, suggesting a common motherly instinct which can be relied upon when attempting to study the lives of ancient Trojan women. 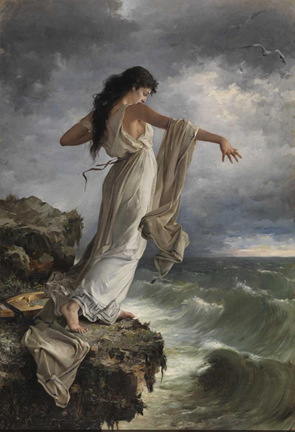 Females in the Odyssey highlight the helplessness of women left alone in a war-torn world to waste their life away waiting, weeping and praying for the safe return of their menfolk. With Penelope’s overflowing house of hopeful suitors, the absence of men to depend on perhaps provides a more honest portrayal of women due to the lack of male support. Modern authors such as Natalie Haynes and Margaret Atwood pick up on this aspect of Penelope’s independent character in A Thousand Ships and The Penelopiad.

Homer’s Odyssey presents Penelope (viewed as the ‘ideal woman’) as the female version of Odysseus; his less credited intellectual equal. Upon the return of Odysseus disguised as a beggar, Penelope brags ‘three whole years I deceived them blind, seduced them with this scheme’[1]. This shows two ways Penelope is like her husband: firstly, she is a skilled deceiver, and secondly, she is proud of it. These similarities draw attention to the vast inequalities experienced by Penelope simply because of her gender.

Although men dominate Greek tragedy, ‘the texts often explore or query these issues through female characters and the culturally more marginal positions that they occupy’[1]. This observation enables us to see the entire genre of Greek tragedy from a new perspective: simply a recreation of the gender bias of ancient Greek society. The way female characters deal with their social position enabled Greek audiences to reflect on and examine their own culture.

Despite the misogynistic attitudes of many characters in the play, it is arguable that Euripides’ Medea is a feminist text. The play not only explores the mistreatment of Medea, but her almost revolutionary responses to her inferior treatment. An attribute which explains why Greek tragedy is a popular genre of theatre today despite its misogynistic nature – for the unique and comprehensive insights it provides into the lives of women[2]. Medea’s infamous speech sees her emasculating men: ‘one birth alone is worse than three times in the battlefield behind a shield’[3]. On the other hand, she describes a woman as ‘timid, shy, weak and can’t even look at weapons but when she is deceived by her husband, when her marriage is mocked, there is nothing more bloodthirsty than her’[4]. This depicts a woman’s intense dependence on her marriage and its immense power.

Euripides’ Bacchae provides a controversial depiction of wild, free women: ‘bulls, with pride of horn, were dragged down, set upon by dozens of girlish hands, which grabbed at them, defleshing them as quickly as you could wink’[5]. This graphic description gives a vivid portrayal of the Bacchant women, breaking gender stereotypes and providing a rare example of violent women in classical antiquity. Although the Bacchae provides an almost feminist view on freedom and violence, it may also serve to highlight the lack of liberty for women in real society.

Although there is no surviving writing from Roman women[6], as a book of advice ranging from beauty and hygiene to letter writing intended for female audiences, Ovid’s Ars Amatoria 3 does provide an insight into their lives. Ars Amatoria 3.5 provides beauty advice consistent with human nature’s obsession with flaws: ‘Still, faultless forms are rare: conceal your faults’[7]. Ovid’s instruction in Ars Amatoria 3.11 to ‘write elegantly girls, but in neutral ordinary words, an everyday sort of style pleases’[8], provides crucial evidence that despite stereotypes, many Roman women were literate to some extent and were able to compose letters.

As the sole ancient female poet, Sappho is the only complete female voice in classical antiquity. She is famous not only for her incredibly perceptive portrayals of the impossible nature of love and her free attitudes towards sexuality, but for the mysterious and fragmented nature of her persona and poetry – something which has made her more appealing to audiences throughout history but also more open to misinterpretation. In the Ode to Aphrodite the female gender of Sappho’s lover becomes clear with the Greek participle ‘ἐθέλοισα’19 (willing).

Although accepted in classical antiquity and the modern era, Sappho’s sexuality was oppressed by scholars throughout history who attempted to alter her image posthumously, many people insisting she was heterosexual. For example, despite a lack of any concrete evidence, there was a tradition among scholars that Sappho committed suicide for the love of the ferryman Phaon by jumping off the Leucadian cliffs. Therefore, regardless of the credible nature of Sappho’s poetry, throughout history Sappho’s image has been altered by others. This suggests a tradition of male opinions, attitudes and cultures being forced upon the voices and perceptions of women.

To conclude, contrary to Pomeroy’s opinion, the study of women in ancient literature – although often portrayed through men’s views and opinions – is the study of women to some extent. Due to the imperfect nature of the modern world, perhaps we should look to the values and opinions of women of classical antiquity for guidance. These female figures and characters provide an insight into the intrinsic value of courage in the face of oppression, an essential moral which is at the root of so much good in the world and has the potential to do so much more.

Freisenbruch, A. The First Ladies of Rome, London 2010